“The past, present and future occurs simultaneously and future actions can change the past. And anything is possible.” -Lynda Schlosberg 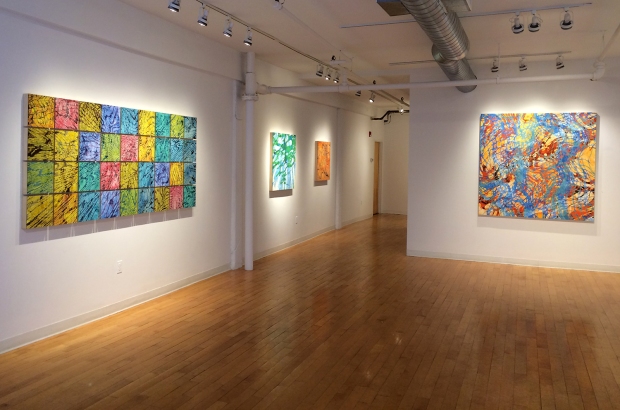 The paintings in “The Conscious Web” bring on a sense of plunging into an alternative reality. Ornate and enigmatic spaces do not duplicate the everyday, but possess familiar organic structures and rhythms that are built with complex skeins of lines and dots painted in colors as bold and beguiling as gems.

While the paintings may evoke the deep sea or vast, starry skies, they are not landscapes. The artist’s conceptual impetus is to portray energetic connections throughout the universe, where people, places, thoughts, and things intersect. The dots are metaphors for atomic particles, the submicroscopic, smallest unit of everything. The fine lines conjure matrices whose rippling gestures suggest interactions between subatomic matter. 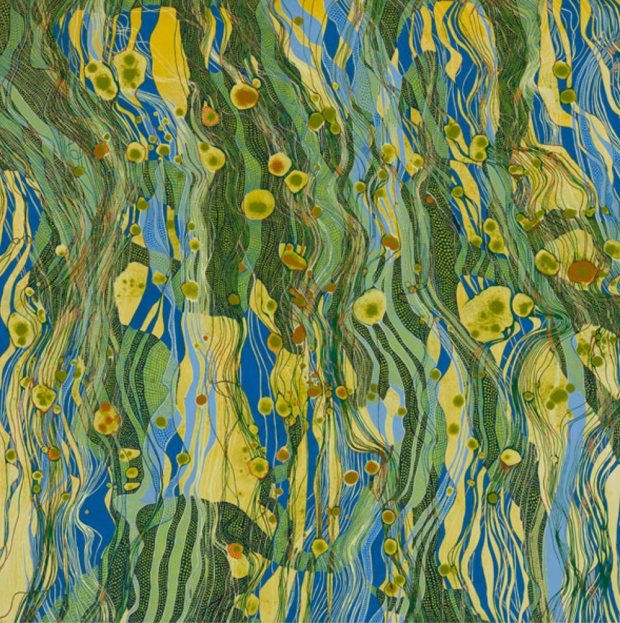 The at-times immersive and vertiginous atmosphere makes the painted space seem limitless and sublime. In the twentieth century, modernist painters broke from the past, making grand works not for religion or humanism, but as inspired by their own feelings. Inheritors of Albert Einstein’s theory of relativity and Sigmund Freud’s theories about the subconscious, their artwork made sense of newer ways of comprehending the world.

Schlosberg’s muse, the concept of a unified field of energy, provides an apt twenty-first century update to understanding the world. The marks in The Conscious Web form fluid, dappled, rippling spatial planes that do not adhere to a fore-, middle, and background. Like circuits or rhizomes, they have no dominant ranking, allowing for multiplicity in terms of what may instigate influence, growth, and time. 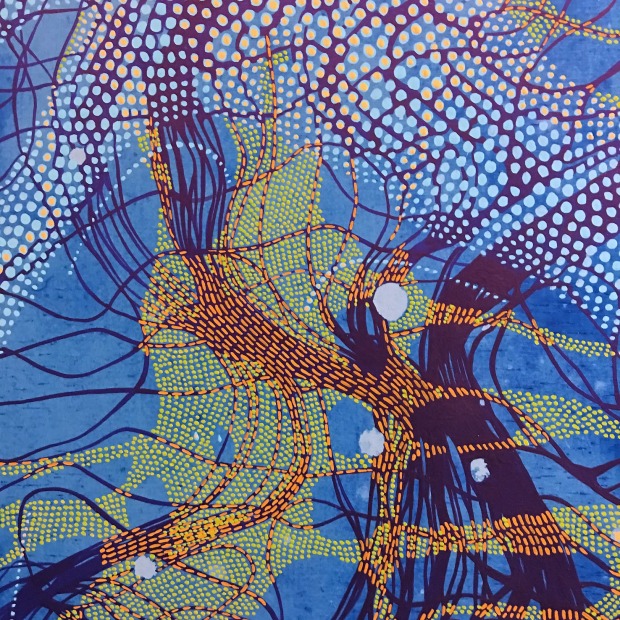 Each work is an act of engagement with the belief that all things already exist, yet they can manifest themselves in many different ways. The use of patterns are also meaningful: Schlosberg says, “there is more than one path to the same destination, and the repetition of form(s) alluding to this is a purposeful part of the development of the work.” Like impressionistic maps at the scale of particle physics, they suggest aspects of our world that are not visible to the unaided eye, but do exist.

Scientists have found that, when atoms are watched, they behave differently than when there is no witness. That the act of looking, or the presence of consciousness, alters reality is a  tantalizing premise for visual art. Schlosberg’s paintings may be read as meditations on this fact, or reminders, prompting us to take care with our actions, as each ripple touches everyone.

The titles guide us toward these realizations. Entangled with You looks like two planes pressing against each other, registered with fingerprint-like forms. At times the lines match, moving in rhythm with each other, and at other points they diverge. A Messy Cloud of Probability appears to be a kinetic, soft crush of pigment. Its composition harmoniously unites organic and hard-edged imagery, emblems bridging the intellect and the senses, insisting that we are more than our flesh. When we die, we cannot fall out of the universe. Our energy alters, as a grid may pivot direction or pool around a bright dot. It is hard to tell how close or far away we are from the theoretical matter in each image, and that’s part of the idea. The dynamism and complexity of the universe remain an abiding mystery. 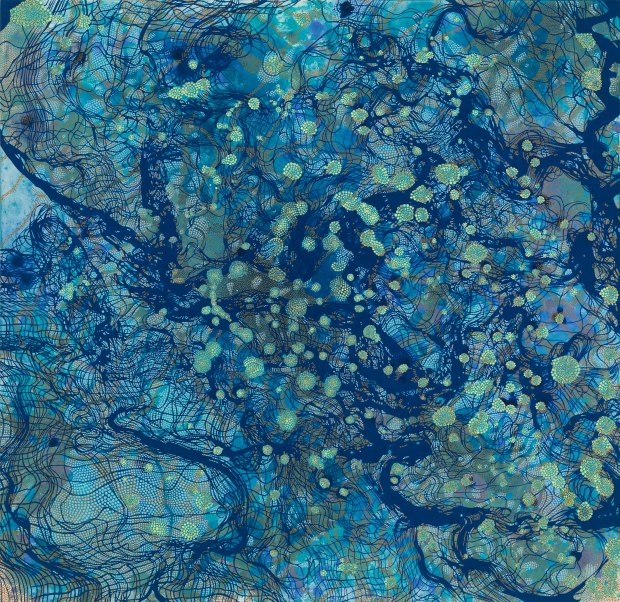 Shana Dumont Garr is the Curator of Fruitlands Museum in Harvard, MA. She was previously the Director of Kingston Gallery, and prior to that, the Director of Programs & Exhibitions at Artspace in Raleigh, NC. She has a MA in Art History from Boston University and a BA from Colby College in Waterville, ME.

Kingston Gallery features contemporary art by New England artists specializing in a diverse range of media including painting, photography, sculpture, and installation. The 30+ Kingston artists exhibit in our three on-site gallery spaces; the Main Gallery, Center Gallery, and Kingston Project Space. Kingston is an artist-run gallery space incorporated in 1982 and supporting a schedule of 22 shows per calendar year plus several special events and group shows. Kingston Gallery takes its name from its original location on Kingston Street near Boston's Chinatown. In the mid-1990s, the gallery was one of the very first to relocate to Thayer Street, anchoring what has since developed into the vibrant SoWa Arts District of Boston's historic South End. View all posts by Kingston Gallery