When we first came up with the idea for this show we didn’t have any set expectations on how we were going to define the parameters of the exhibition. We live in a political climate of extremes: Trump yells “grab them by the pussy” while the incoming freshman class in college protests that their gender does not fit the neatly organized boxes in application forms. We wanted to include many kinds of social constructs that define the body, from gender identity to class differences, race and heritage, since they are all part of the interlocking systems of power that defines the body.

Five Kingston Gallery members took on this project, Mary Lang, Nat Martin, Conny Goelz Schmitt, Ann Wessmann and me, and understandably we each brought our own artistic interests to the selection and curatorial process. I don’t want to diminish the collaborative vision that we developed as a curatorial team, the show is strong in its entirety, but due to time and space limitations I will discuss here a few of my favorite pieces and themes.

We started with Trump, and found Kathleen Kneeland’s response “Grasp This!” a pink vagina beautifully crafted out of rose canes and thorns. And then, Loraine Sullivan’s “Lift and Separate” which takes its title from an old bra advertisement, was made in response to Dr. Christine Ford’s testimony during the Brett Kavanaugh hearings. Both of these responses are visceral and direct: voicing our collective frustration and anger.

However, as a curator I felt that much of the process was about juxtaposing work to create a wider narrative, beyond Trump’s politics, to approach it from an intersectional perspective and collect works that reflect the complexities of defining body politics today. Michael Costello’s two separate pieces, for me stood out as a diptych. The portraits are of the same person but their bodies seem to be a collage of various different person’s body parts. The faces too, express different psychological states of mind. In one, the figure is posing deliberately, exposing genitals to the audience, almost like an old-fashioned pin-up poster. In the other drawing, the genitals are hidden in a more calculated pose. I get the feeling that this might even be an image of someone looking at their own reflection in the mirror. Both are performative acts, exaggerated by a clown like white powdered face and orange hair (not surprised to see that Michael has also made many drawings of clowns). To the right of Costello’s drawings, Russell Gibson’s sculpture of a body hangs from the ceiling like grapes, or a lifeless puppet? This puppet is not performing. Legs are mostly what defines this shape. Sexy puppet with hairy legs? I am drawn to the uncanny quality of these limbs. According to Russell these are two bodies coming together, but I imagine that if the sculpture was hanging a bit lower it could walk on all fours.

Across the room Natasha Moustache’s photograph of a non-binary body in bed is intimate and lovingly shot. Although not revealing a face, the reclining nude is well aware of “the gaze” of the photographer and willingly exposes a gender fluid pose. The image is in black and white but I can almost imagine the warm light in the room as the backdrop for this performance. Pair this with another homage to Judith Butler, Nick Papa’s painting where he rotates Christ on the cross to make him recline for his queer gaze. Here Nick’s self-portrait is in conversation with the eroticized Christ. He has represented himself innocent, a sweet butterfly belly ring and his own actual whitie-tighties. You can almost imagine him as a teen sitting in a church pew looking at the paintings instead of reciting prayers. The memory of the oversized nails on the cross and the blood, inspired him to hanged this small painting with a huge nail and a red string.

As in Nick’s paintings, the tension between humor and struggle also is apparent in Skylar Borgstrom’s drawing of a bird perched on a little boy’s head. Right out of a comic book, this drawing seems to have all the requirements for being fun and funny, until you notice the puddle under the boy’s feet. Is this a puddle of tears, or in his fear and anxiety did he wet himself? The closer you look at the figure the lonelier he becomes as a drawing in the middle of a giant piece of paper. The title “Boys Don’t Cry”, is for a colorfully dressed but timid and vulnerable person. 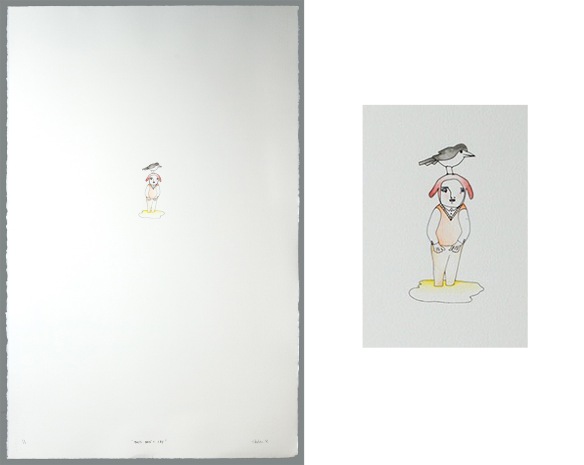 In the center gallery is Jennifer Boisvert’s marble bust with Brian Reeves’ 3D printed navel necklaces. Boisvert has created a gender neutral bust, where the focus is the spine which has been embellished with a tattoo design. Referencing classical sculpture, this torso is made out of a cool marble. But unlike the heroic Roman figure, this one is slightly curved in a pained posture. Adjacent to this, Brian Reeves complements the austere marble and granite with colorful 3D resin sculptures. Brian’s piece is a complete designed commodity, including the packaging and the retail store presentation, a piece of wearable art. Unafraid of commenting on the “art world” this “EZGaze Omphalos” (Greek for navel), is certified to be “an unlimited edition”, “interactive”, “certified masterwork” and has a “soothing symmetry”. It comes in different skin colors, including two shades of very bright pinks. While wearing it as a necklace if you get tired of gazing at your own navel, you also have the option of sliding in one of the three “mini master works” also made by the artist himself. Perfect gift for a few artist friends you have? It is also “affordable art”. Buy one, maybe not even in your own skin color?

Move away from the rainbow of navels to a very black body bound to a chair. Red blood vessels explode out of the chest. Jeffrey Nowlin’s figure made out of reclaimed fabric is heavy and static. The body is defined by crippling illness. Diagonally across the room we have a performance piece by Keegan Shiner, that will be activated during the two opening receptions, July 12 and August 2. It should be a spectacle centered around the idea of multi-tasking and art as labor. Keegan will be painting, a-la-Pollock, in public, while playing a video game, talking on the phone and getting his cardio exercise on a stationary bike. Forget about meditating in the studio and waiting for inspiration to descend, Keegan is a post-studio artist multi-tasking. Art is hard work, and Keegan will sweat making it. He leaves behind his oeuvres, a series of paintings to prove that he has put in a fair amount of labor.

Labor is also part of Rene Galvan’s readymade. The Dolce & Gabbana suit jacket which hangs from a closet hook can only be dry cleaned, as the title of the piece suggests. Fancy suit, requires fancy cleaning. But this suit has a name tag patch, the size a mechanic would wear. It says, “Hired Help”. Although the body is physically absent here, the narrative points at the labor and economic divide.