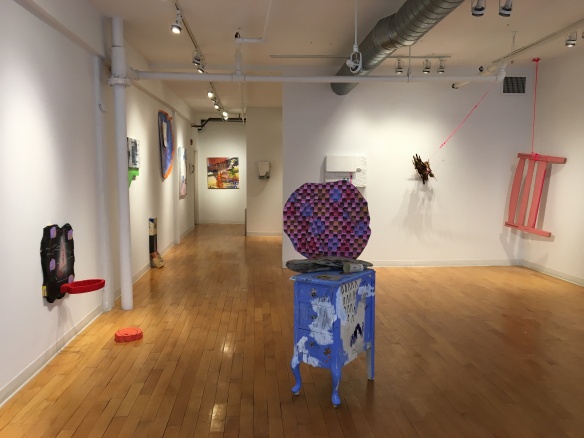 The current exhibition at the Kingston Gallery is a pop-up show titled Pinky Promise. It features interdisciplinary work by Shelby Feltoon (the Guest Curator), along with found object, collage, and mixed-media by artists Cameron Boyce, Meagan Hepp, and Katie Lane. This special project was spearheaded by the 2018-19 Kingston Gallery Emerging Artist Emily Brodrick.

Guest Curator Shelby Feltoon responds to a few questions about the exhibition:

How would you describe the curatorial process for this exhibition? What factors influenced how you picked artists to work with? Were there themes that emerged as you began forming the exhibition?

This exhibition was born out of considering visual continuities between the works of the artists selected for the show. Each of these artists are my close peers in the artist community, so I spend a lot of time talking about and looking at their work. Driven initially by noticing relationships between color and mark making in two of the artists’ works, I then started to consider how my own work related in terms of content and subject matter. When I was considering the qualities of the first two artists, the phrase “pinky promise” sort of organically popped into my head and stuck. The choice for one final artist fell into place as I started to think about how context could shift and how that phrase could take on several meanings. The title initially represented a way to play with bright colors and a way to make a show that centered around childhood innocence (and how innocence can fade over time), and as I began working closer with the artists in preparation for the show, it also became so much about community, trust, and reliability as well.

In the past few months I have thought a lot about my relationships, and how people don’t change, no matter how long you’ve known them. The child in us will always recognize the child in others. My goal in curating the space was not so much to highlight the artists separately, but rather to create a full-gallery “installation” of sorts, full of bold and quiet moments and unconventional displays of work.  By the time the show was laid out and hung, I realized that this youthful sensibility was seen in every corner of the gallery, and it seems to be resonating really deeply with folks. It all feels so familiar. People may tend to bury their sense of playfulness as they get older, but play is the foundation of our learning and growing as humans.

Were there special considerations for this exhibition as it being a pop-up show? What insight can you share with other curators for organizing an exhibition like this?

Knowing that we had such a short run time for this show was actually quite liberating. This was a really special opportunity for the artists and myself, and I wanted them to feel like they had a chance to get new work out of the studio and just play. Each artist has brand new work in the show, and it’s been great to collect reactions and feedback to that work. Not to say that it is unrefined or couldn’t hold up in a month-long show, but I think the pressure was taken off a bit knowing that we only had 11 days to live with the work in the gallery and see what it looks like on clean walls. I think it made me bolder and weirder and more spontaneous with my curatorial choices, and it pushed us all to finish projects. We also worked hard to advertise our reception, which was really successful. Knowing that there isn’t too much time for folks to come by and see the show, the reception was important for getting a large group of people in front of our work. For others curating short-term exhibitions, I would advise to treat a show, the artwork, and the artists the same whether the show is up for one day or one year. Your ideas will be seen and heard, and the less time there is to see the show, the more concentrated attendance will be. Take pride in your craftsmanship and precision in transforming a gallery to match your vision, but feel excited about taking risks and having fun because it will be over before you know it.

Pinky Promise is on view at the Kingston Gallery through August 25, 2019.