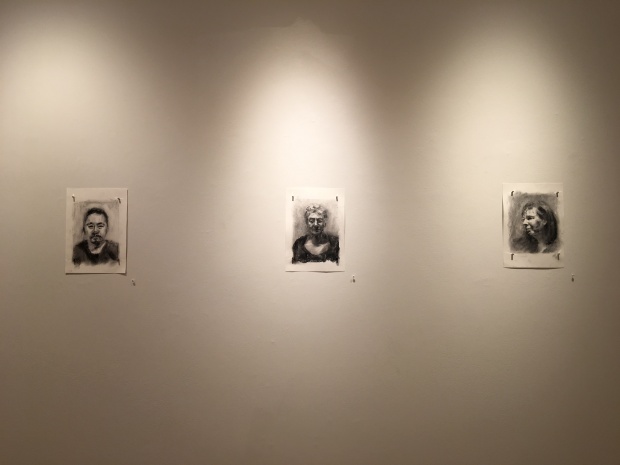 Jamie Bowman enlivens the practice of traditional figurative painting with her exhibition Portraits, on view at Kingston Gallery through February 28. This series of small-scale works depict the nurses who care for Bowman’s mother, who was paralyzed in an accident a year 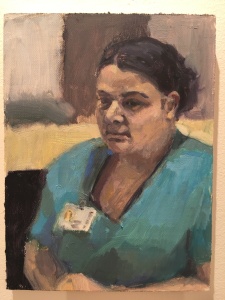 ago. Doubtless, complex emotions accompany the fallout from such an extreme and unfortunate accident. This series is significant for recognizing the people who became a part of her life.

The paintings also record what can come of creativity in times of crisis. The artist chose to represent each nurse as an individual engaged in quiet reflection, rather than relating to others and in action, as Bowman likely got to know them. While she became acquainted with her subjects through their profession, these portraits demonstrate the psychological intimacy that can come about in the process of direct representation.

Models can significantly influence the outcome of a work of art. They bear witness to its process, and even as silent, unstirring, paid professionals, their presence can inform choices in an artist’s mark-making. In this case, the models arrive first as part of a support system, then become models. Their significance often comes across in the 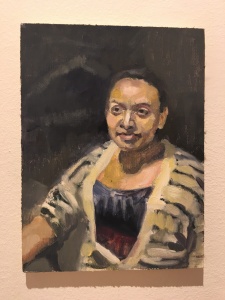 portraits. Bowman’s charcoal drawings focus directly on the faces of each person. We associate nurses as being in constant motion, even when exhausted, their job is to care–both as an action and as a discipline. These images allow us to contemplate what thoughts and images may be on each nurse’s mind as they sit for the artist. By creating these portraits, Bowman bears witness to the value they play in the life of her family as her mother recovers. They acknowledge that she sees them as people beyond the function of their job.

Bowman is an Associate Member of Kingston Gallery. Based in Boston, she has shown widely, including at the Danforth Art Museum, Framingham, MA, First Street Gallery, NYC, and Walter Feldman Gallery, Boston, MA. Bowman has a MA in Studio Teaching from Boston University, Boston, MA, an MFA in Painting from the University of New Hampshire, Durham, NH, and a BFA in Painting from the State University of New York at Plattsburgh, Plattsburgh, NY. 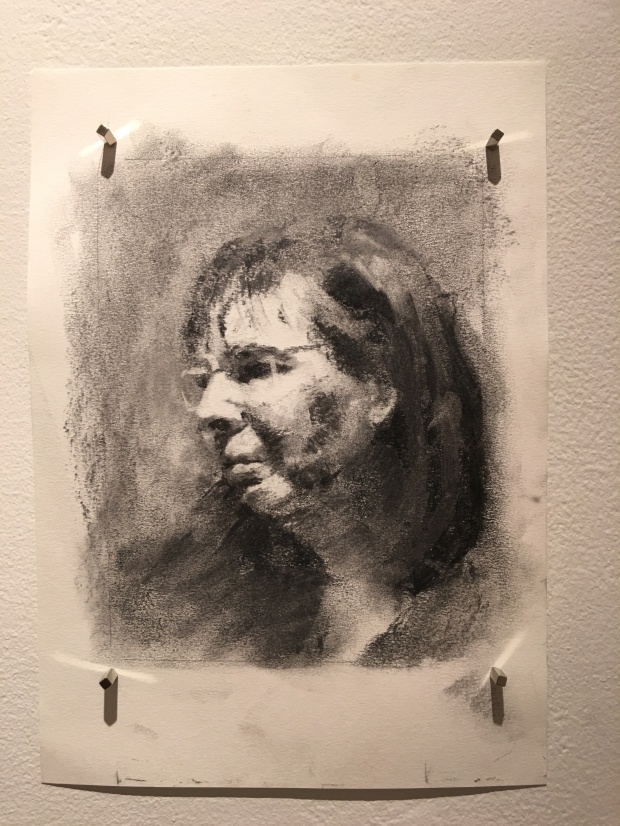 Barbara Moody is a resident artist at the Vermont Studio Center this month. She kindly sent photos of her studio and the drawings and paintings in progress. Like much of her work, these pieces possess rhythmic compositions that make the imagery seem to float, despite the elaborate compositions.

Those of you who visited Kingston Gallery this month may recall Moody’s large biomorphic, abstract piece in I Know Just What You’re Saying. It is the first piece you see when you walk in the door, and when you visit the exhibition page of our website: kingstongallery.com. My favorite part of it are the scratches into the surface of the varied colors.

Have a look, and take note that Moody’s next solo exhibition at Kingston will take place in April 2017. Stay tuned for other opportunities to see her work in Greater Boston and beyond. 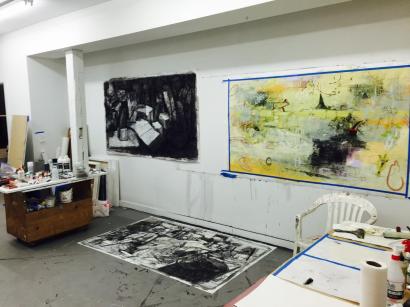 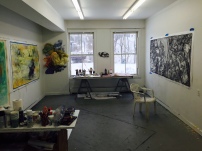 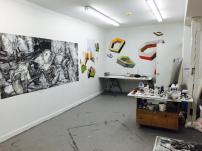 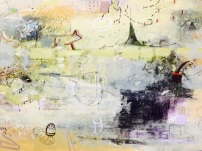 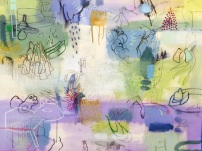 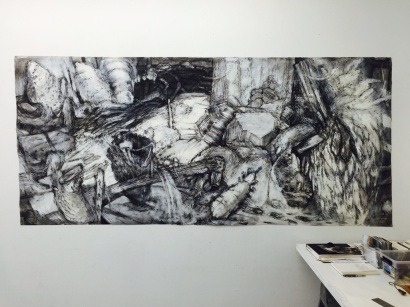 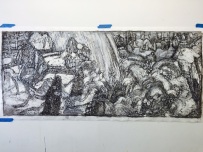 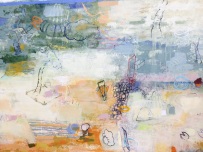 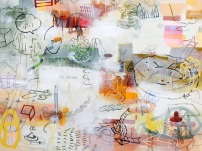 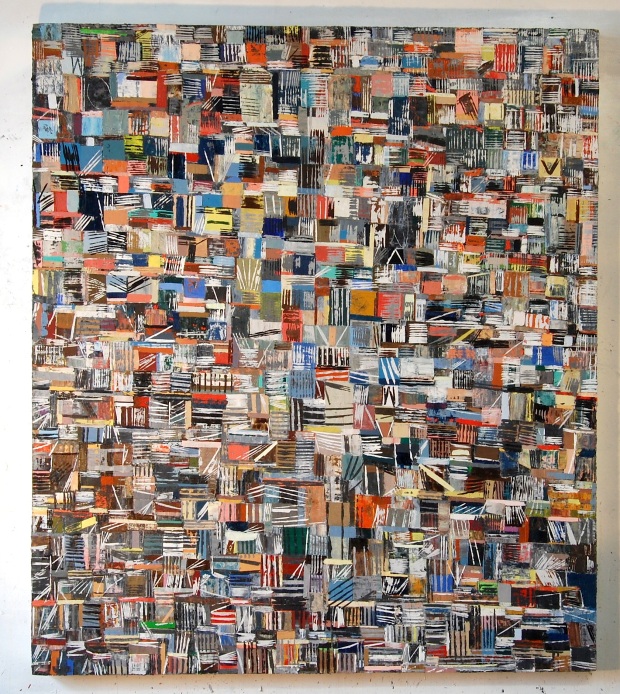 Stacey Alickman’s paintings are all about the paint and the paint is alive. It is emphatic; it exceeds the boundary of its support. In fact there is a painting in the exhibit which has literally been shattered by design and has shed its frame. The paintings are filled with gesture; the paint swoops and flourishes, shimmies and shakes. It asserts itself. It announces itself with bravado. Each piece is a complete world; collectively the paintings create a universe, a universe that is emphatically hopeful, one filled with motion and connection. The artist invites the viewer to share in this exuberance and these worlds. She holds up a mirror and lets us in the door. 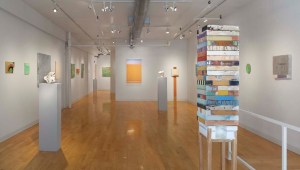 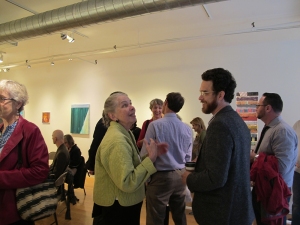 Last Saturday we had a wonderful (first ever) event in the new Second Saturday series organized by the Boston Art Dealers Association in conjunction with the current exhibit Ground Cover: Contemporary Abstraction between Figure and Ground, curated by William Kaizen, Assistant Professor of Art History and Visual Studies, Northeastern University. The panel Abstraction and Contemporary Art included Kaizen in conversation with Peter Kalb, Associate Professor of Contemporary Art, Cynthia L. and Theodore S. Berenson Chair, Brandeis University and Martha Buskirk, Professor of Art History and Criticism, Montserrat College of Art. They had a terrific conversation and great feedback from the audience as well. This is my response to and understanding of both the talk and the exhibit itself.

Sometimes I see things differently. It can happen after I read something, hear a lecture or visit an exhibit, and I will be profoundly affected and pleased by this new understanding of the world around me. This is the case with Ground Cover, seeing the works in the exhibit with the particular lens of the relationship of ground to figure and the ways the artists express their relationship to the theme. They all make their work by hand, perhaps expressing our collective anxiety to an ever-increasing technological world; perhaps balking at the trend of many contemporary artists whose practice involves technology for the production of the work.

The artists chosen by Kaizen exemplify the exhibit’s theme of ground cover and they each articulate in a variety of ways this relationship of figure to ground. In his curatorial statement he says: “Dancing between thing and nothing, event and non-event, appearance and disappearance, the works in Ground Cover transmute ground into figure and figure into ground.” Each of the works asserts itself in relationship to figure/ground or ground/figure and also articulates the space of the gallery and in so doing reaffirms itself as an object. For each, the question of what is figure and what is ground is one that is answered or resolved by the process itself and the resulting object. This assumes that the paintings are objects and not just surfaces for material. In fact all the works hover in the liminal space between object and surface in varying degrees.

The artists in the exhibit are not ambivalent about making objects and raise several important questions. How does their work function in our ever-increasing technological world? Why is abstraction still relevant? Artists always have responded to their particular culture. Art is made in response to society and thereby becomes its window. The work in Ground Cover gives us many different ways to see. 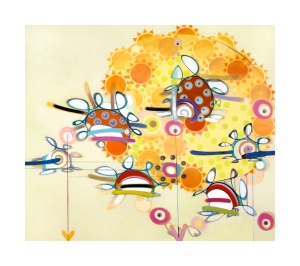 On a recent visit to the current group exhibit Free Association 2014 at Kingston Gallery, a question presented itself: what holds this exhibit together? In spite of the enormous variety of mediums, from tyvek, vintage books, photography, acrylic, encaustic, fabric, weaving, to graphite, there is a wonderful sense of rhythm and synergy exuding throughout the gallery and between the works as well.

There is also a great sense of space and air. The gallery is enlivened, it seems to be filled up with air. Although there was no curatorial overlay here, it is as if there was a plan and direction for the exhibition, creating this ineffable sense of lightness and breath.

What ties these artists together is simply that they are all Kingston Gallery Associates. But it is as if they colluded with each other in advance, so that the work would resonate in terms of color, form and shape, and so it does, so it does.

Lynda Schlosberg’s current solo exhibit on view at the Kingston Gallery is a tour de force.

The works are about everything and nothing. All the paintings are inferences of something possibly recognizable, and the mind/eye wants to make sense of the formlessness of the forms:

The shape of a hurricane

They are also very much a demonstration of labor, emphatically made by hand, and evidences of time.

The paintings, on paper or wood supports, seem to be made by looking down and inward (a kind of internal mapping) and the results are dazzling, expanding outward.

The squareness of the supports force the eye to keep moving in the space and to keep looking, trying to resolve the visual field.

They bring to my mind images and ideas associated with the Australian Aboriginal notion of Dreamtime, a place beyond time and space in which the past, present and future exist wholly as one.

All of these thoughts resonate with the notion of Zero Point Field, which is the guiding title of the exhibit.

“In a quantum world the Zero Point Field is an omnipresent energetic substructure. It is the lowest possible energy state where all matter has been removed and no particle movement should remain. Yet no particle ever comes completely to rest, every particle is forever in motion due to an endless ground-state field of energy that continually interacts with all subatomic matter. Thus, the Zero Point Field becomes a mirror image and record of everything that is and ever was. In a sense, it is the beginning and the end of everything in the universe, a basis of oneness.”

After contemplating this idea as stated by artist Lynda Schlosberg, come see the work for yourself and talk to the artist about this concept and how she attempts to express them in paint.

We want to share this news from Kingston Gallery member Julie Graham:

Julie Graham will hold a Public Gallery Talk on Tuesday, June 24 at 4:30 pmon her current exhibit Topoanalysis in our Carol Schlosberg Alumni Gallery at 23 Essex Street, Beverly, MA. Her show will remain on view: May 28 – June 27, 2014. Learn more here: montserrat.edu/galleries/schlosberg 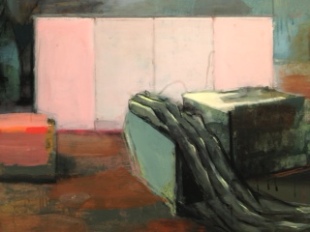 Barbara Moody is known for her tremendous versatility and virtuosity, often presenting very different work for each of her exhibits. In her current show at Kingston Gallery several compelling groups of work contribute to the whole. For me, the most intriguing is the group of four paintings titled Inside/Outside. Each has a swath of terrifically strange color, informed by the layers underneath and by the adjacent passages of paint.

Moody talks about the instability of everything and that the work here is informed by this idea; nothing is held in place and danger lurks everywhere at anytime. But Inside/Outside is contained, held by the internal geometry and the limits of the rectangular support. The other works, especially the wall of small paintings in the Center Gallery, expand beyond the frame (either by inference or actually) and are not to be tamed or contained. The central passage of each in the Inside/Outside series is singular in color: pink, several yellows, green; each one holds its respective center and draws us in. A tour de force indeed.

The exhibit runs through June 29.

I am intrigued by the title of Barbara Moody’s current show: Escape.
It can mean or infer so many things, for her, all of the works in the exhibit act as metaphors for her fears of the potential dangers that may occur at any moment. There is no stasis and everything feels random. There is no escape.

The exhibit continues through June 29.